Added a second helicopter model to the end of the Golden Wings page.

Added a most unusual Space Patrol Cricket moulded in brown to the Cricket P1 page.

Added a good pîcture of the Golden Astronaut Space Probe triple card to replace the low-quality one I had previously.

Added pictures of another example of the Cricket copy by an unknown maker, this time in yellow and complete with its launcher.

Added better pictures for the Nuclear Freighter copy, an unknown vehicle type and the Spectrum MSV type by Mortoys.

Added the Space Blimp of Christmas to the larger toys by LP.

Added an example of the larger #608 Exploring on the Moon series to the packs by LP.

Added a third card to the Space Set series of blister cards by LP.

Added a page for a later version of the Golden Astronaut Super Set which has a revised box lid featuring a new pair of cut-outs.

Added a Space Set card made by LP for Happy Mates. This contains a later version of the LP Space Cruiser which has been added to the page about this craft.

Added an early card with inner frame for the GA Terrain Tiger.

Added more creations by Paul Woods towards the end of his page.

Added a page for the Hong Kong Toys '70 trade magazine which features an advert by McArthur Ltd and photographs of the Spacex toys they manufactured.

Added a simple advert by Roxy to their page in the Copies & Clones section.

Added an advert by Polyline to the Tarheel/Durham page in the Copies & Clones section. The Quacky Duck car appearing in that same advert has also resulted in small changes to the Rosenthal and JR Toys pages.

Added pages from the Hong Kong Toys '72 trade magazine featuring LP toys to the end of the page about that company.

Added another couple of creations by Paul Woods towards the end of his page.

Added a copy of the Hawk by an unknown manufacturer from Spain.

Added a blister card containing a Helicopter P3 with the later rotor version that has shorter secondary blades.

Added Japanese versions of the GA instruction sheets for the Mobile Launch Pad and Moon Base H.Q. to the Instruction Sheet section.

The Jack Rosenthal page has been updated. I was overjoyed to be contacted by his daughter Ruth, who filled in blanks I had before. The result of our correspondence is on a new Recollections page in the Rosenthal section. It also added another page about his first company (Cavendish Distributors, linked towards the end of his page) as well as adding some details to the Story So Far page.

Added a promotional set of LP-type astronauts for Alpha Star ice lollies by Unilever towards the end of the LP figure copies page.

Added a gift set by the Newmark watch company which includes a Spacex LEM.

Added an original shop display for the Deluxe Reading Rocket Base towards the end of the LP command centre page.

Added Kevin Davies' latest creation, the Nuclear Pulse, to (the end of) his fan page.

Added the double-page spread on Golden Astronaut toys from the 1971 dealer catalogue by Multiple Toymakers. Which shows a Gift Pack with a press-out kit for a Spaceport Tower.

The Made in Mexico section has been replaced by a section about the Lili Ledy company, after one of the two Mexican Spacex copies was identified as having been produced by that company. The other Mexican toy is now found in the Other section. (URLs for these pages have remained unchanged to not foul up any possible links from outside.)

Added a probable inspiration for the triple dish array of the Apollo Tracker.

Added a header for a Spacex display rack.

Added the LP Under Sea War-Car to the larger LP toys.

Added a box for the LP Space Dog and amended my previous thoughts on the number suffix.

Added a price detail picture to the 2005 and Beyond page.
Also added to the footnote there to point out details in a linked catalogue picture.

Added a small footnote to the Linda page.

Added Kevin Davies' latest creation, the Mobile Launch Platform, to (the end of) his fan page.

Added a detail picture of a price tag on a Spacex card halfway down the Prices page.

Added more detail pictures for the Kresge Freighter copy and added a page for a Hawk copy that looks like it was made by the same unknown manufacturer for Kresge as well.

Added a most unusual Security Copter moulded in brown to the Helicopter P3 page.
Added an inside view to the Prospector page.
(a third down their respective pages)

The pages for the Golden Astronaut Super Set and its vacuformed moonscape have been updated now that I finally have one. The main Packaging, Toys, Story and Numbers pages have also had the odd line added concerning this set. 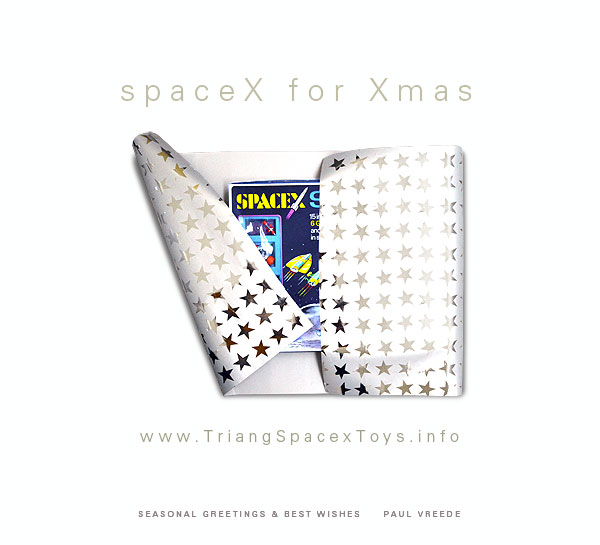 After many years in the works, this site -finally- went live.