Tarheel Industries was a division of Empire of Carolina from Tarboro, North Carolina, Tarheel being a nickname for that state's inhabitants (1). Sister company Empire Industries is still well-known for its range of blowmoulded Xmas and Halloween decorations which were locally produced, whereas Tarheel toys were sourced from Hong Kong (and later Japan). Empire of Carolina filed for bankruptcy in November 2000, having already sold its Tarboro facility in June of that year.

There sadly aren't any dates on the Tarheel toys we have, but the three Nova rockets will most likely be from 1969. In that same year, Tarheel marketed the US range of Project Sword toys (we're sure of that from their appearance in the 1969 Montgomery Ward Xmas catalogue). The Nova rockets share product nr 5918 which is right in the middle of the Project Sword number sequence which would indicate that on the US market the ranges were very contemporary (2), and may have been imported simultaneously by Tarheel (with the Nova rockets destined for cheaper outlets such as Woolworth, as indicated by the price stickers found on the packaging).

Of the two Tarheel logos we know, the one shown above at centre seems to have been exclusively used for the Tarheel Project Sword series. All other Tarheel toys seen so far carry the "T with kids" logo at left. Even some of the Tarheel Sword toys exist in alternative boxes without the Sword arrow and with a black and red "T with kids" logo replacing the "T and globe".

Next to (or possibly after) Tarheel, these three Nova rockets were also sold on blister cards by Durham Industries, looking identical to the Tarheel versions and with the identical product number 5918 but having Durham's logo and address moulded in on their underside (see below). The Tarheel "T and globe" trademark used on Tarheel Sword packaging looks very much like the older (3) Durham trademark (above right), and the town of Durham isn't that for from Tarboro in North Carolina. Durham did use a New York address, but the NY 10010 zip code will almost certainly refer to an office the company will have had at the Toy Center at 200 Fifth Avenue (4) and used that as its main address, similar to Miner Industries, Marx and quite a few other US toy companies. So it's not impossible that production facilities may indeed have been based in Durham, NC. Because of the similarity in trademarks and because Tarheel and Durham marketed other identical toys as well, both Paul Woods and myself have looked into whether the two companies were related at all, but so far haven't found any evidence either way. Because Durham's version of the Project Sword Space Glider doesn't bear any Project Sword insignia, the impression is that Durham's versions of identical toys might be later than Tarheel's.

However Tarheel and Durham may have operated, the three Nova ships themselves were produced in Hong Kong by Polyline Manufacturers Ltd, a company that was in business from 1962 to 1992. The three spaceships appear in the advert below (left-hand page) from the Hong Kong Toys '70 trade magazine, published by the Hong Kong Trade Development Council. 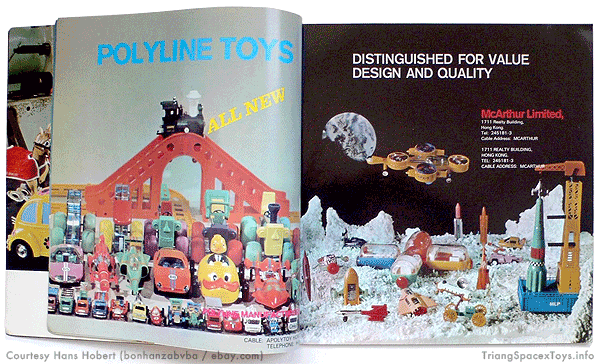 Similar to some Project Sword toys originally being sold by their manufacturer Tai Hing, it is quite possible that Polyline produced and sold the Nova rockets independently before these were brought to the US by Tarheel and Durham. But if that were the case we haven't found any earlier versions yet. And with the Nova III toy (qv) based on a film prop appearing in the latter half of 1968, meaning a production timeframe very close to that of Spacex, and with the Nova name also being that of a Spacex toy, it seems more likely that these larger toys appeared after Spacex was introduced and that the Nova II is copied from the Spacex Hawk design.

All Nova ships are clearly marked underneath with either a Tarheel or Durham trademark.
The nr 5918 is shared by all three toys irrespective of who sold them.

External links open in new windows; just close them to get back here

1: "During the late unhappy war between the States it [North Carolina] was sometimes called the 'Tar-heel State,' because tar was made in the State, and because in battle the soldiers of North Carolina stuck to their bloody work as if they had tar on their heels, and when General Lee said, 'God bless the Tar-heel boys,'; they took the name."
from 'Grandfather Tales of North Carolina History' (1901) quoted on Wikipedia. back to text

2: Paul Woods is compiling an illustrated list of Tarheel product numbers on his blog. back to text

3: According to a trademark listing, the Durham trademark was registered in April 1964 and expired in January 1989. back to text

4: I have found one reference listing the Durham address as 41 Madison Avenue, New York, N.Y. 10010, which houses the New York Merchandise Mart. This is right across Madison Square from the Toy Center, but only opened in 1974 so is too late for the period these toys were produced in. back to text