Another copy identical in shape to the Spacex original, except for the details shown below.
The reasons I'm inclined to attribute this copy to the same manufacturer who supplied Kresge are included at the end.

Although at first glance identical, the first noticeable difference is the absence of the blue striping of the Spacex original. The name stickers on the copy are placed further forward as a consequence. The copy is also moulded in a more drab-looking orange. (Note the copy's cockpit has turned partially white due to too much glue.)

The plated exhaust detail is slightly different; the one on the copy (at right) being somewhat wider with a centre exhaust that's somewhat thinner.

Underneath is where it gets really interesting. The body halves are glued together as opposed to screwed like the Spacex original. However, there are dimples visible at the same spots where the screws would have been, which could indicate the moulds have been changed to remove the holes for the screws, replaced by inner pegs (compare with Spacex original below at left, which has similar dimples exactly where the inner pegs are that hold the wings in place).
The undercarriage and wheels are again identical to the Spacex originals. The underside is marked Made in Hong Kong at the rear. (The brown stains appear to be from adhesive holding the metal weight inside.)

Comparing this Hawk copy with the Kresge Freighter shows why I think it was made by the same unknown manufacturer who also supplied Kresge:
- Both are identical to Spacex originals except for a few details
- Both are marked in exactly the same lettering placed at the rear of the underside
- Both have identical undercarriage and wheels (identical to each other as well as to the Spacex originals)
- And I got both together in one lot from the US (together with some real GA toys), which increases the likelihood they were originally bought at the same Kresge store if not bought there at the same time as well. 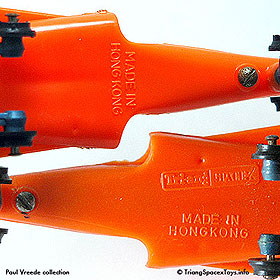