This somewhat battered copy of the Spacex Patrol Cricket passed by under the radar on eBay, only being found by chance by Paul Woods when it was long sold. Thankfully the auction's picture of this toy was still retrievable and of good quality, which the seller kindly made available to me. And then another one turned up, this time in green and with a plated panel on the nose, which is identical in shape to the blue one above.

Although very close in general, the comparison below shows the two most distinctive differences: the somewhat crudely-moulded panel on the nose with only five ribs, and the smaller cockpit dome sitting in a much thicker ring. My example is missing its launcher, so that remained a mystery at the time.

Years later, Bill Bulloch managed to get one in yellow, complete with its launcher.

The launcher also looks very similar, but on closer inspection is basically a solid piece of plated plastic with two orange-red rings. It doesn't fire any missiles like the real Cricket does. 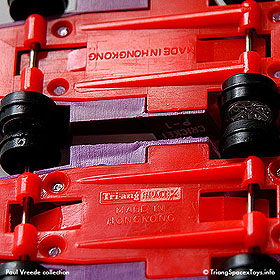 This copy is only marked "Made in Hong Kong", the lettering being all but straight and barely fitting on the panel.