This page focuses on places relevant to Spacex and Golden Astronaut toys.

External links open in new windows, just close those to get back here. Google Street View images can be zoomed, panned and navigated.
I've also included links to see the locations on a map, because the links available within the images don't zoom in enough.
A disclaimer is also necessary: because Google updates Streetview images (esp in New York), the views shown may not necessarily be what I intended. I've already changed two out of three NY addresses to historic streetviews (being the ones I initially had on this page when I made it) but whether these actually display as intended is a bit of a roulette game it seems, possibly also depending on browser type and age... Furthermore, the streetviews can take several minutes to appear, depending on bandwith and/or browser. If they don't appear at first, then open this page in a new tab or window and let it load for awhile...

The main location of the Lines Bros group, designed by Walter Lines and opened in June 1925. Jack Rosenthal was based here, ca. 1968-71, and Raphael Lipkin had his office here too after his company was taken over in 1964 - this is the address marked on Spacex boxes for the three large Stage 1 toys he designed. The same address is used for the Rovex Wholesale Division in a trade advert for Spacex toys so the administration side of it must've been here as well (use your browser's Back button to return here).
After Lines Bros went under in 1971, the entire site was demolished in 1974 to make way for a new business park. Fortunately however, the V&A Museum of Childhood (part of the Victoria & Albert Museum, London) has a large part of Lines Bros' archives in its collection, and where I'm grateful they helped me with the aerial view below. It shows the Triang works in the late 1930s, looking from the south-west. And if you look closely, you can spot the football goals on their own playing fields! 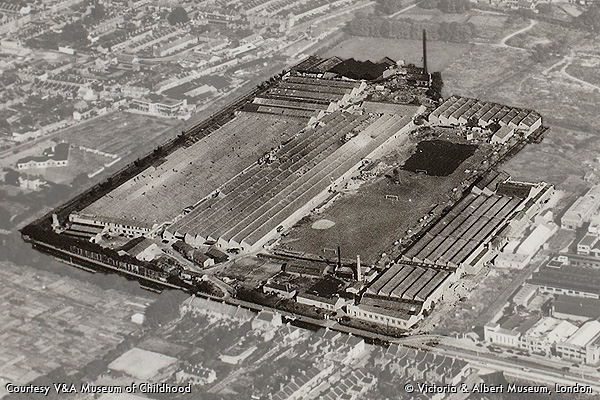 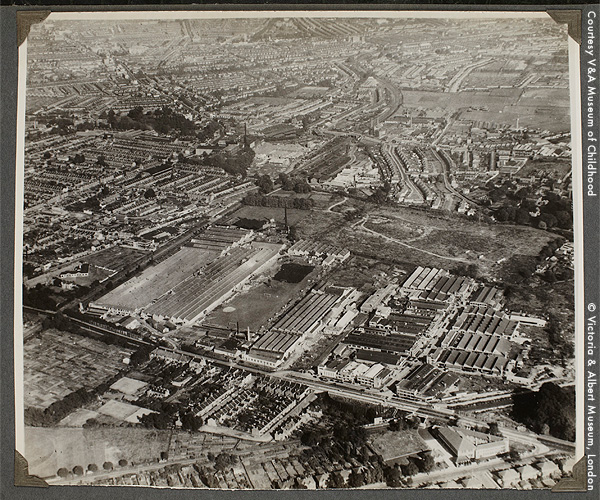 Here is a map of the works' location on the east side of Morden Road. The works had their own goods railway siding, next to a railway line that ran along the north side of the complex and was replaced by Merantum Way after it was torn up (the railway bedding west of Merton Rd is still indicated on Google Maps, continuing on from Merantum Way).
Comparing the aerial view to the map and satellite images, the Triang works were bordered by what is now Merantum Way to the north, the A24 (Morden Road) to the west, the thin path at the eastern end of Jubilee Way to the east, and a line running 'below' Big Yellow Storage to Deer Park Rd in the south.

The works are also proudly illustrated on this catalogue cover from 1938. 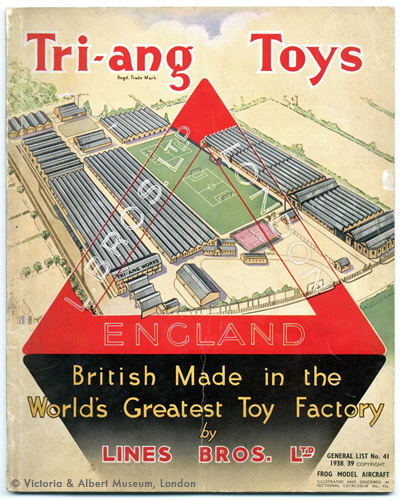 Built in 1953, this was the main location for the Rovex group within Lines Bros, and was where Spacex toys were warehoused and distributed from by the Rovex Wholesale Division. Today, the complex is still the home of Hornby trains (successor to Triang-Hornby trains) and the Scalextric slotrace brand.

The Brighton Toy Museum has an aerial view of the site in the late sixties.
Link to location on map, where it's the block with the pointer for the visitor centre at the corner.

Completed in 1967 (1) and counting 31 floors, the Realty was Hong Kong's tallest building for three-four years. Both Century 21 Toys and McArthur Ltd had offices on the 17th floor, roughly halfway up the building and, judging by the 'low' room numbers (respectively 1701-1702 and 1711), presumably at the front end (Des Voeux Road side) of the building.

Now completely hemmed in by taller buildings, when the Realty was new the rear of the building had a fine view, looking over Connaught Road and the ferry terminals, across Victoria Harbour towards Kowloon and the Chinese mainland. The rear of the building is visible in a contemporary photograph, where the Realty is the building behind the one sporting the Winston advert, or 'above' the VW Beetle visible at right towards the rear of the parking lot. (The building at the rear on the far right in that photo had me very puzzled btw, since it appears literally to be a mirror image of the Realty which made it most confusing when spotted in other photographs!).

Being on the then-waterfront, the Realty soon gained a large lighted sign on the roof advertising Rolex watches, visible at two-thirds to the right in a photograph from 1975 (mouse-over that image to zoom in a bit), and also in another photograph where the Realty peeps out at right from behind the Hong Kong Cenotaph.

Today the building is known as Wing On House, Wing On being a chain of department stores going back more than a 100 years.
Link to location on map (note I've had to move into Pottinger St to get the view above).

This is the real address for Miner Industries and its Multiple Toymakers division as found on shipping boxes, and from where Golden Astronaut toys will have been distributed.
In the street view image below (taken June 2014), the building last housed the Murray Feiss import business of lighting fixtures, and a sign on the other side indicated it was being converted into loft apartments. However, the building is now occupied by Moishe's Self Storage, who had it painted bright red all over. (If the building shown below is already red instead of beige and brick, then the historic streetview image doesn't work as it should... (2))

The Toy Center was the correspondence address listed on Golden Astronaut packaging. Miner had a booth or office at the Toy Center, as did Marx (who used the same adress as well) and justabout everybody who was anybody in the US toy trade. (If the foreground traffic doesn't show a white van, yellow cab and red pickup then again the historic streetview doesn't work as it should (3)).

The main building was redeveloped in 2007-8 and is now a prestigious office complex (good pics under 'gallery' at the owner's website, earlier detailed pics in a slide show with an article by the NY Times). The only toy company still present on the premises is Lego, who have a flagship store there (few pics at top-right of its web page). A secondary building at 1107 Broadway connected with a walkway which has since been removed. (200 Fifth Ave at left, 1107 Broadway at right). Wikipedia has a bit more background to the place itself. Link to location on map

This was Jack Rosenthal's personal address in 1969, as listed on one of the US Design Patent registration documents (use your browser's Back button to return here). It's in a quarter known as Woodside Park (just west of Finchley where estate agents tend to place it). To be clear, it's the house with the Prius parked in front (in case the zoom doesn't work as intended).

Link to location on map, where the marker doesn't appear to be correct (European street numbers aren't always very accurate in Google Maps). I've counted back from nr 11 where the house number is visible to arrive at what should be nr 5 shown above (and also not nr 9 as it says with the view above...).

1: How the Realty Building's completion year of 1967 tallies with Century 21 Toys moving in in October 1966 I have yet to find out/review. The completion date is from Wikipedia, whereas the moving-in date is from the corporate registration documents I found in Hong Kong. back to text

2: If the historic streetview indeed doesn't work, then click on the 'display in Google Maps' link within the image. This gets you a new window with the same view, but with a little clock symbol at top left as well. Click that and set the slider to anywhere before June 2016 to see the building before it was painted. back to text
3: The same trick doesn't quite work for the view of the NY Toy Center, because the pan and zoom of the original image were different from the current, most recent view. The original view was from further back and showed more of the building without any periodic scaffolding or trucks or buses in front. Ah well... back to text