Leon Raphael Lipkin was a -very- prolific toymaker, offering his services to other manufacturers as well as producing many and varied toys on his own account. This page intends to provide an impression and some background to the man who designed the three larger Spacex Stage 1 toys. Thankfully he had a name unique enough to find a few things:

On August 1st, 1941, he came out of OCTU as a cadet to be commissioned a 2nd Lieutenant in the Royal Army Service Corps (what today we'd call logistics and administration), with Army Nr 198483 (unfortunately only relatives can request service records). He ended the war as a (temporary) Major, and received a military MBE for gallantry in 1946. Although amongst Service units the RASC are the only ones considered to be combat troops as well, a military MBE is awarded for gallantry or acts of bravery not in the face of the enemy. (2)

In early 1944, he married Rosemary Arbib in Marylebone, London. Her birth doesn't appear to be registered, meaning she'd've been born outside the UK (or just possibly due to a typo - the marriage entry for her name has her married to "Upkin"!). A daughter called Angela was born late 1945 in Islington (London/Middlesex), but that is sadly the only record I can find for her on FreeBMD, meaning she either didn't marry or left the UK. (3)

The marriage to Rosemary appears to have foundered, for in early 1949 he married Gentilla Gottheimer in Willesden, Middlesex (North London), for whom there also doesn't seem to be a UK birth record. They appear to have had no children together. (4)

On 11 February 1954, Raphael and Gentilla registered what appears to be their first company: 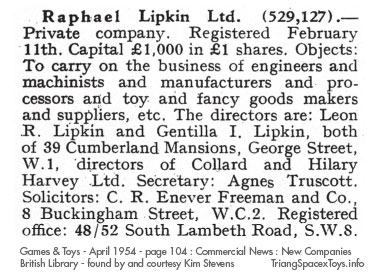 A second company seems to have followed, for I've found reference to Raphael Lipkin (Toys) Ltd, company number 613611. And probably a third, Raphael Lipkin (Engineering) Ltd, company nr 755528. The third one I can't find much about, but because our man appears to be the only Raphael Lipkin in the UK at that time, I imagine it could only be his. It wasn't located at 48 South Lambeth Rd London SW8 however, but had an address at Roxburghe House, 273-287 Regent St, London W2 and apparently was an investment company. There are no longer any records available at Companies House (online at least) for any of these companies, so the engineering/investment company still has a question mark. (5)

Both Raphael Lipkin Ltd and Raphael Lipkin (Toys) Ltd were bought up by Lines Bros (Triang) somewhere around 1964, and are found amongst a number of other Triang subsidiaries (very well-known or less so) going into voluntary liquidation on 14 December 1972 after Lines Bros went bankrupt in 1971. I imagine these were the subsidiaries that weren't interesting to the people buying up the others, and appears to've happened in one marathon session at an accountant firm's address of 19 Eastcheap, London EC3, with the same liquidator being appointed from that firm as well. (6)

Raphael Lipkin (Engineering) Ltd was voluntarily wound up on 16 January 1973, but "prior to re-construction". The liquidator is different from the people having handled the Lines Bros subsidiaries (the notice also lists the registered address and activity mentioned above). If this company was indeed also Raphael Lipkin's, then perhaps this was to be "reconstructed" to continue his activities after the collapse of Lines Bros, who knows. At any rate the company was officially wound up on 22 April 1974, and no other news for it seems to exist. (7)

There is no death record for Raphael Lipkin to be found on FreeBMD, which has records up to 1983. However, I believe it's possible he may have passed away in 1983 or early 1984. Because I did find a notice of Gentilla (Bobby) Lipkin passing away on 11 May 1984, including an address for receiving claims against the estate. Which I imagine wouldn't be the case if there'd be a surviving widower (or children for that matter). (8)

Lipkin was a very prolific entrepreneur, certainly helped by the fact that he was in on the still-early days of toy production in plastic. There is evidence he made his expertise available to established manufacturers such as Lesney and Yonezawa, and he was granted a number of patents for toy innovations (listed below). He also produced numerous toys of his own, using three brands: the LRL running clown, Plaston and Pippin. He had many of his toy designs registered, which again proves the originality of his work.

Judging by his multi-slot money box and toy tractors, Lipkin's earliest offerings carried the LRL running clown trademark, but subsequently were sold in new boxes carrying the Pippin brand. The LRL trademark was also used for toys developed for/with other companies, and continued in use for that purpose as is illustrated by the toy kitchen scale produced "in conjuction with" the Salter company.
The box for the well-known early Matchbox service station Lipkin produced in 1956-7 for Lesney (who at the time had no plastics moulding capability of their own) is also signed with the LRL trademark. Two years later Lesney were manufacturing the garage themselves, whereupon Lipkin sold a version of his own via the Pippin brand, which must already have existed by then.

Entry for Raphael Lipkin Ltd in the 1969 Harrogate International Toy Fair catalogue.
The 'exciting and exclusive range' mentioned may very well have been Spacex.

Lipkin continued to market his own toys through both the Pippin and Plaston brands, but usually (certainly during his Triang years) specified on Pippin packaging that the toys were manufactured for that brand by Raphael Lipkin Ltd. Why he used two different brands for distribution I don't know for certain, but the few Plaston toys I've seen are marked as first manufactured by Shipton Plastics (9), and later by Guiterman (10). The Pippin brand might have been exclusive to toys produced by/for Rovex-Triang even before Lipkin joined that group, but Plaston toys ended up amongst Pippin Toys as well after Guiterman went under - Plaston toys are included with Pippin toys in a 1966 catalogue (shown on the Pippin page of this section). The best-known Plaston toys are licenced TV-based products (two toys representing Gerry Anderson's Supercar and Stingray f ex, and a Dr Who phone box), while there is at least one toy range I know, the Funny Men by Pippin Toys, where Lipkin licenced an actual toy design from another inventor.

Unfortunately, none of Lipkin's brands can be researched in official records anymore. In Britain, trademark records as well as the companies register are kept at Companies House. However, trademark registration needs to be maintained by each owning company, else the registration lapses. If that happens, the records themselves will be deleted after a certain period of time, which explains why most of the trademarks of interest to us can no longer be researched through Companies House. The exception was Pippin Dolls (a sister brand to Pippin Toys), which I asked about just in time as it was due to be scrapped through the neglect of its last owner. Sadly however, the documentation only went back to 1972, at which time the brand was owned by Pedigree, one of the Triang/Rovex companies acquired by Dunbee-Combex-Marx in 1971. So, we're back to the 'fossil record' of the toys themselves...

Although it's not the intention to try and include every known Lipkin toy on these pages, the lists below show some examples to illustrate the variety and quality of Lipkin's toys, not to mention the excellence and ingenuity of his engineering. And I'll be happy to add good photographs of other Lipkin toys should you happen to own any.

This list links to documents on the European Patent Office website (in new windows).
Illustrations of each invention are found on the last page(s) of each document.

1): Birth registry index pages found on FreeBMD for Leon, sister Doreen and possible brothers Leopold and Solomon Lipkin.
Because it later transpired that the months mentioned on FreeBMD are not accurate (the original listings being recorded per trimester instead of monthly), I've deleted these from the text and occasionally used 'early' or 'late' instead. back to text
2): London Gazette notices of Lipkin's assignment to RASC and award of military MBE (the heading to that list of names is several pages back). More on the RASC and MBE on Wikipedia. back to text
3): Registry index pages on FreeBMD for marriage of Lipkin and Rosemary Arbib, and birth of daughter Angela. back to text
4): Registry index pages on FreeBMD for marriage of Lipkin and Gentilla Gottheimer. back to text
5): Raphael Lipkin (Toys) Ltd is listed amongst Lines Bros subsidiaries being wound up in 1972 and a further search in the London Gazette found the engineering company (both see below). The company numbers were found on the type of business information websites that rehash and sell (usually freely) available public information. back to text
6): Year of Lines Bros acquisition from an e-mail to me by Pat Hammond (who wrote the three-volume Triang history) based on Lines Bros annual reports. Voluntary winding-up and appointment of liquidator of Lines Bros subsidiaries from London Gazette notices. back to text
7): London Gazette notices for voluntary winding-up, appointment of liquidator and final meeting of Raphael Lipkin (Engineering) Ltd. back to text
8): London Gazette notice of Gentilla Lipkin's death. back to text
9): E Shipton & co were a huge name in telecommunication equipment (and still exist), who also set up a toy division to profit from their expertise in plastics. Most Plaston branded packaging I've seen so far is also marked Shipton Plastics Ltd, Northwood Hills, Middlesex. back to text
10): the Guiterman company appears to've been active in quite a few industrial sectors, and also produced larger plastic toys (and had subsidiaries producing other games and toys such as Budgie diecast cars) before going into voluntary liquidation in March of 1966. Jack Rosenthal worked at Guiterman before starting his own company ca. 1960. back to text