Although appearing to be identical in shape, the Kresge version of the freighter has an astronaut figure sitting in place of the crate of the original Spacex version. For which the 'seat back' has been added to the mould of the body top.

Comparing this loose (but sadly incomplete) example reveals that it really is identical in shape to the Spacex original, except for the astronaut figure, the markings underneath and the fact that the body halves have been glued together instead of screwed like the Spacex original is.

The figure looks very close to the driver of the Spacex Forklift, but is smaller in size. The hatch cover is identical to the Spacex original.

The undercarriage and wheels are again identical to the Spacex originals. The underside is marked Made in Hong Kong at the rear, while other markings at the centre of the underside have been crudely removed (the M of 'made' is still faintly visible at top left). What's completely mystifying is what these (now obliterated) original markings may have said... 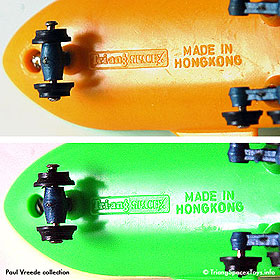