Sadly, no example of this toy has surfaced so far. Since we only have the illustrations on card backs (above) and in an advertisement (below), there's nothing much we know about it other than that it might be yellow.

Extrapolating from the wheels in the illustration and the relative size it is shown in the advert (both illustrated in extreme perspective), our little group of collectors is divided over the size of this toy. Some of my friends are convinced the Rocket Transporter has wheels like the Cricket or Forklift which would make it rather large and thus require a box. To my mind however, the Rocket Transporter will probably share the relatively small wheels fitted to the LT-10, which would make it similar in length (some 170 mm - 4 1/2 in). Such a size would fit with the size of the MLP platform as shown in the advert and, more importantly, would also still fit on a blister card. Which would make sense since I believe that much like the Stage 1 series, the smaller toys sold on Pippin cards will have been introduced before three larger toys in boxes were added to the range at a later time. 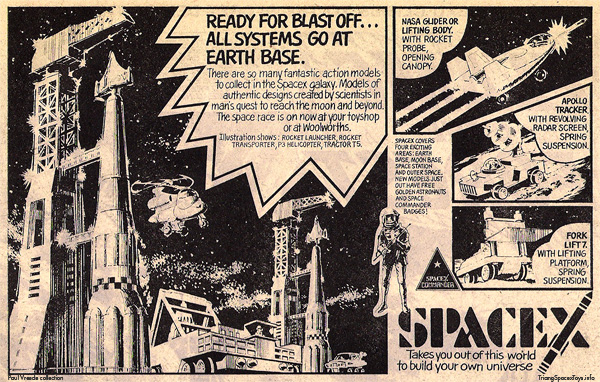 Not available as GA